PM wrote Mahatma Gandhi had understood Cong culture very well, 'which is why he wanted Congress disbanded, especially after 1947'. 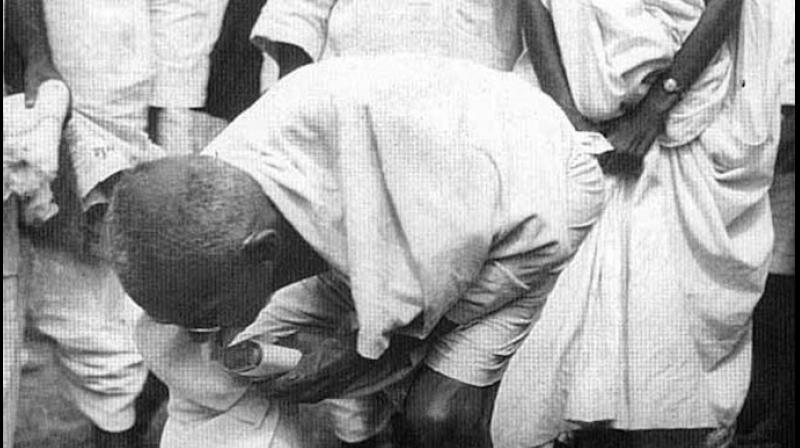 PM Modi began with an ode to "the great Sardar Patel", who, he said, had a key role in planning 'every minute aspect of the Dandi March, down to the last detail'. (Photo: narendramodi.in)

New Delhi: On the anniversary of Mahatma Gandhi’s 1930 Dandi March, Prime Minister Narendra Modi on Tuesday wrote in a blog that the anti-thesis of Gandhian thought is Congress culture. This attack comes on the day when the Congress Working Committee meets for a strategy session in his home state Gujarat.

PM Modi began with an ode to "the great Sardar Patel", who, he said, had a key role in planning "every minute aspect of the Dandi March, down to the last detail".

"In many of his works, Gandhi Ji said that he does not believe in inequality and caste divisions. Sadly, the Congress has never hesitated from dividing society. The worst caste riots and anti-Dalit massacres happened under Congress rule," PM Modi wrote.

Continuing the attack, PM Modi wrote that Mahatma Gandhi had understood the Congress culture very well, "which is why he wanted the Congress disbanded, especially after 1947".

PM Modi, quoting Mahatma Gandhi, said while his government had “done everything” to punish the corrupt, India has seen how Congress and corruption have become synonyms.

Read: When a handful of salt shook an Empire!

Attacking the opposition, Modi accused Congress leaders of "filling their own bank accounts and lead luxurious lifestyles at the cost of providing basic necessities to the poor". He also accused the Congress of going the "Dynasty First" way even though Mahatma Gandhi "despised" dynastic politics.

Referring to1975 Emergency imposed by the Indira Gandhi-led Congress government, PM Modi wrote: "A firm believer in democracy, Bapu said, 'I understand democracy as something that gives the weak the same chance as the strong.' Ironically, the Congress gave the nation the Emergency, when our democratic spirit was trampled over. The Congress misused Article 356 several times. If they did not like a leader, that Government was dismissed. Always eager to promote dynastic culture, Congress has no regard for democratic values."

"I am sorry to have to say that many Congressmen have looked upon this item (Swaraj) as a mere political necessity and not as something indispensable....I would go to the length of giving the whole Congress a decent burial, rather than put up with the corruption that is rampant,” Modi wrote quoting Gandhi.

While finishing his blog, he commented that “thankfully”, in today’s scenario the country has a government that is "working on Bapu's path and a Jan Shakti that is fulfilling his dream of freeing India from the Congress Culture!"