The government and Mr Ambani have earlier rejected Mr Gandhi’s allegations of corruption and favouritism in the fighter aircraft deal. 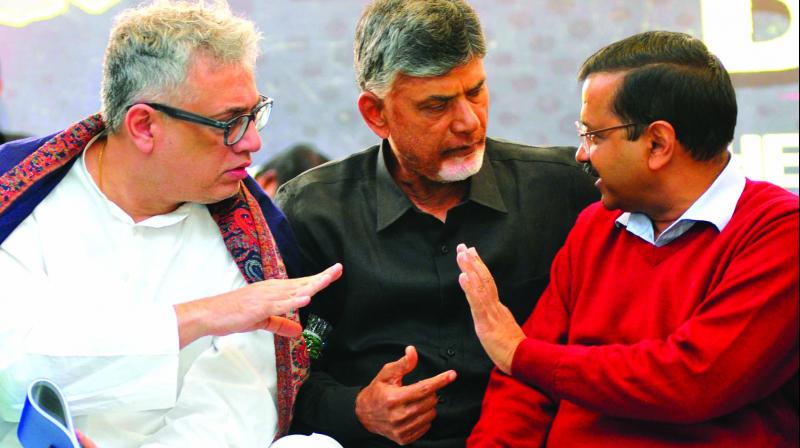 New Delhi: After a brief hiatus, Andhra Pradesh chief minister N. Chandrababu Naidu was back in the national capital with the demand for special category status for his state as he sat on a day-long hunger strike on Monday and accused Prime Minister Narendra Modi of not following the “raj dharm”.

A special category status ensures preferential treatment to a state in getting grants which need not be repaid. At the time of Andhra Pradesh’s bifurcation in 2014, the UPA government had proposed to give special status to the state for five years.

Mr Gandhi, who reached Andhra Bhavan before leaving for Lucknow where he held a roadshow with his sister Priyanka Gandhi Vadra, attacked Mr Modi over the Rafale jet deal.

“The Prime Minister has stolen from the people from Andhra Pradesh and he has given that money to Anil Ambani. That is the fact of the matter. I want to let you know that we are all standing together. We are going to defeat the BJP-Mr Narendra Modi,” Mr Gandhi said.

The government and Mr Ambani have earlier rejected Mr Gandhi’s allegations of corruption and favouritism in the fighter aircraft deal.

Dr Singh, who was the Prime Minister when Andhra Pradesh was bifurcated, said that he stood by the people of the state. “This demand had support of all parties when it was discussed in Parliament. I stand in solidarity with Naidu. These demands should be met immediately without any more loss of time.”

Attacking the Narendra Modi government, Mr Naidu said, “(Former PM) Atal Behari Vajpayee said ‘raj dharm’ was not followed in Gujarat (during the 2002 riots). Now, ‘raj dharm’ is not being followed in the case of Andhra Pradesh. We have been denied what is rightfully ours. If you don’t get it done, we know how to get it done.”

The Andhra chief minister, who started his protest around 8.30 am after paying respects to the Mahatma Gandhi memorial at Rajghat, was pointing to Vajpayee’s reference to “raj dharm” to remind then Gujarat chief minister Narendra Modi of his duty during the 2002 Gujarat riots.

“Whenever there is an attack on our self-respect, we won’t tolerate it. I am warning this government and particularly the PM to stop attacking an individual,” Mr Naidu said.

Addressing the gathering, Mr Sharma attacked the Prime Minister over “the language used by him against Mr Naidu” at a rally in Guntur on Sunday. “It’s unbecoming of the Prime Minister. He has dragged the political discourse to such a low level. Therefore, we decided to unite against him. Standing together is the need of the hour.”

TMC leader Mr O’Brien also took on the PM for “a personal attack” on Mr Naidu.

“Those who live in glass houses should not throw stones at others... ‘BC is Before Chaiwala and AD is After Dhoka’... Modi has lost all his allies and formed a new ally in CBI,” he alleged.

Mulayam Singh Yadav said he is not well but has come to endorse Mr Naidu’s stand. “Naidu is fighting the battle for the poor, farmers and all those who are oppressed,” he said.

Delhi chief minister Mr Kejriwal hit out at the Prime Minister over the alleged ill-treatment meted out to states being run by governments of Opposition parties.