India-China bilateral trade reached USD 84.44 billion in 2017, according to data of the Chinese General Administration of Customs in March. 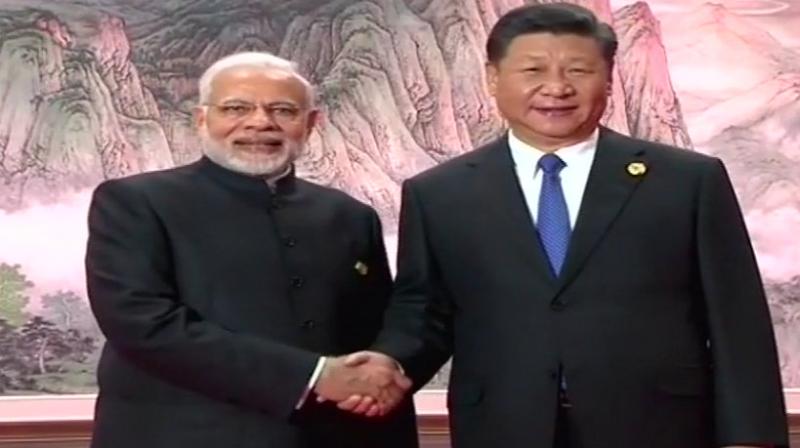 PM Modi had detailed discussions with President Xi on bilateral and global issues on the sidelines of Shanghai Cooperation Organisation summit. (Photo: ANI/Twitter)

Qingdao: President Xi Jinping has suggested Prime Minister Narendra Modi that the two countries set up a new bilateral trade target of $100 billion by 2020 as Beijing is looking at importing non-Basmati rice as well as sugar to address the trade deficit.

PM Modi had detailed discussions with President Xi on bilateral and global issues on the sidelines of Shanghai Cooperation Organisation summit here.

PM Modi said his meeting with Xi Jinping would add vigour to the India-China friendship after their first informal summit at Wuhan in April.

Addressing a press briefing here, Foreign Secretary Vijay Gokhale said that President Xi suggested to Prime Minister Modi that India and China should set up a new bilateral trade target of $100 billion by 2020.

The India-China bilateral trade reached $84.44 billion last year, according to data of the Chinese General Administration of Customs in March.

The two countries had earlier set a bilateral trade target of $100 billion by 2015.

Gokhale said that India has allowed China's state-owned Bank of China to open its branch in Mumbai.

"There was some discussion on trade and investment-related issues. And in that context Xi told PM Modi that China is looking at enhancing agricultural exports from India including non-Basmati rice and sugar," Gokhale said.

An agreement was signed between China's General Administration of Customs and India's Department of Agriculture, Cooperation and Farmers Welfare on Phytosanitary requirements for exporting rice from India to China, one of the World's biggest rice markets.

The 2006 Protocol on Phytosanitary Requirements for Exporting Rice from India to China has been amended to include the export of non-Basmati varieties of rice from India.

At present, India can only export Basmati rice to China.

A couple of business delegations from India and the department of commerce have visited China in the recent months and it is hoped that this will lead to additional imports from India this year, he said.

"The Chinese side also said that it will encourage our pharmaceutical companies to register for high-quality Indian pharma products in the Chinese market. This was an important aspect from our perspective because we have been pressing for greater pharma exports into the country," the foreign secretary said.

In response to the Chinese President's suggestion for enhancing financial cooperation between the two countries and also helping trade, PM Modi conveyed to President Xi India's readiness to permit the Bank of China to establish its branch in Mumbai, Gokhale said.

China has been promising to address the issue of trade deficit with India which has been seeking a greater market access for its goods and services in China.

Trade deficit with China stood at $36.73 billion during April-October this fiscal.

India's trade deficit with China has marginally dipped to $51 billion in 2016-17 from $52.69 billion in the previous fiscal.