We are 'Aim Changers', not 'Name Changers': Modi attacks Cong

Narendra Modi said the BJP government was committed to working for the nation and the poor. 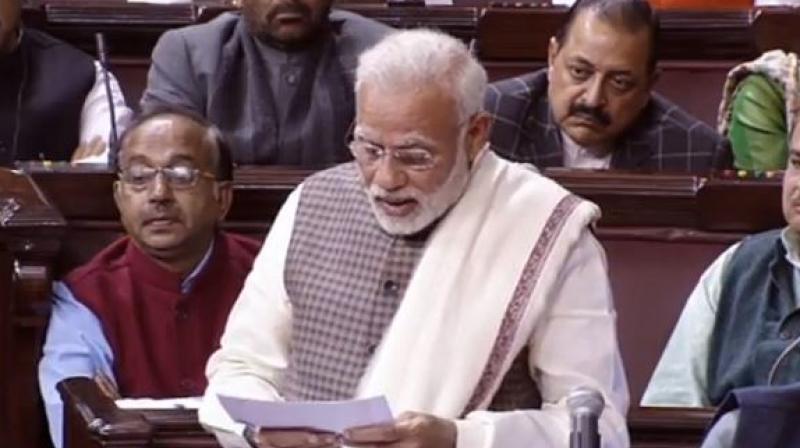 Referring to Aadhaar, Modi reminded the Congress that the notion of Aadhaar originated in LK Advani's speech during a debate in the Rajya Sabha in 1998. (Photo: ANI | Twitter)

New Delhi: After a 90-minute long offensive against Congress in Lok Sabha, Prime Minister Narendra Modi continued his attack on the Opposition in Rajya Sabha saying that the Congress has been cut off from the ground after a reign of 50 years and is unaware of the reality of situation in India.

Modi said the BJP government was committed to working for the nation and the poor. "We are always looking for suggestions, feedback and input on our schemes," he said.

Addressing the Rajya Sabha, Modi recalled Mahatma Gandhi and said that the latter, post the independence, wanted the Congress party to dissolve.

“You need Mahatma Gandhi's India, even I want Mahatma Gandhi’s India. Gandhi ji post the independence had said that ‘now the country is free, the Congress must be dissolved’,” said Modi.

"You said we are Name Changers and not Game Changers but if you notice our mode of operation and working pattern you will realise we are Aim Changers," he said.

"We plan our action, set the road map so that we take the nation on the path to development," he further said.

Referring to Aadhaar, Modi reminded the Congress that the notion of Aadhaar originated in LK Advani's speech during a debate in the Rajya Sabha in 1998.

Modi also quoted the united opposition against the Triple Talaq Bill and said that the Congress should have brought the law themselves when in power, if they wanted changes in it.

Modi questioned the Congress for blocking the OBC Commission bill and the Triple Talaq bill. He also questioned the party's sensitiveness towards the aspirations of backward communities.

The Prime Minister also pitched for a constructive discussion on holding simultaneous Lok Sabha and Vidhan Sabha elections in the various states.