Riyaz Naikoo was a top commander of the Hizbul Mujahideen 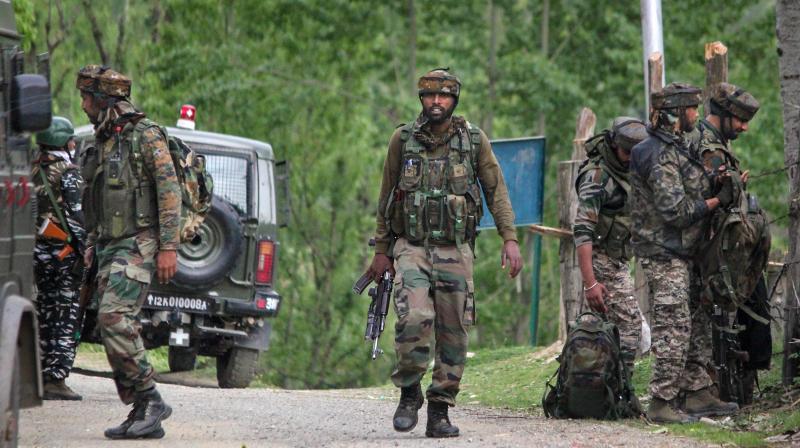 Engagement between security forces and militants has intensified this week in Kashmir. Here we see security personnel leaving after an encounter with militants in Handwara in Kashmir earlier this week. (PTI)

Riyaz Naikoo is said to be the successor of Burhan Wani. According to security forces, Naikoo carried a reward of Rs. 12 lakh on his head.

A senior police officer, Imtiyaz Hussain, tweeted “Riyaz Naikoo wanted by law in crimes against humanity finally taken down by security forces. As always a never dying sprit, resolute & single minded devotion of J&K police at the forefront of this ugly proxy war has been the key. God bless @JmuKmrPolice.”

The killing was the major event in no less than three encounters that raged in southern Kashmir’s Pulwama district since Tuesday evening. Mobile internet services were snapped and the forces began enforcing curfew-like restrictions in almost the entire Kashmir Valley on Wednesday.

The authorities in Srinagar said that the restrictions were being enforced “as a precautionary measure.”

Police sources said fighting broke out between the holed-up militants and security forces early Wednesday. “Contact with the militants was established early today. The exchange of fire is going on,” said a police officer on the phone from Pulwama.

Confirming this, the J&K police tweeted, “Contact established in the third operation at #Beighpors #Awantipur. Top terrorist commander is trapped. Exchange of fire on. Details shall follow”.

In a separate encounter that was going on in Sharshali village in the Krew area of Pulwama, one militant was killed. Police said the firefight broke out after the security forces launched a cordon-and-search operation in the village on Tuesday night after receiving inputs about the presence of militants in a private house.

Army sources said more than a dozen families living in the vicinity of the encounter site were evacuated to safety.

Security forces have stepped up their tough campaign against militants in Kashmir. They have killed 75 militants across J&K so far this year. Twenty-seven security personnel and 15 civilians have died in clashes and other incidents of violence during this period.