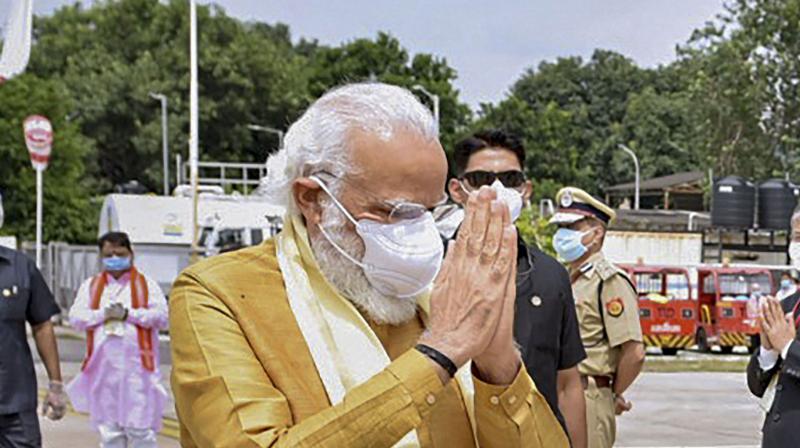 New Delhi: Prime Minister Narendra Modi on Wednesday reached out to South-east Asian countries like Indonesia and also parts of India’s immediate neighbourhood like Nepal and Sri Lanka, where the cultural influence of the ancient epic Ramayana is still felt, adding significantly that when a nation is strong, it is able to ensure peace.

At a time of Sino-Indian military tensions, PM Modi also mentioned China in his speech as a country where references to Lord Rama have been found. He also pitched for a continued strong cultural outreach by India to the world.

In his address at the temple town of Ayodhya, on the occasion of the foundation stone-laying ceremony for construction of a grand temple dedicated to Lord Rama, PM Modi mentioned five south-east Asian nations — Indonesia, Malaysia, Thailand, Laos and Cambodia — where the cultural influence of the Ramayana and Lord Rama are still felt. In India’s immediate neighbourhood, he mentioned Nepal and Sri Lanka in this regard. PM Modi also said references to Lord Rama were found even in China (in India’s immediate neighbourhood) as well as Iran (in India’s extended neighbourhood).

India has been ramping up ties with ASEAN comprising the 10 South-east Asian nations, a move seen as extremely important for India in the Indo-Pacific maritime region. India also continues to nurture close strategic and cultural ties with Indonesia which has the world’s largest Muslim population. Not surprisingly, therefore, Indonesia was also the first foreign nation to be mentioned by PM Modi in his speech on Wednesday at Ayodhya.

In addition, the fond reference to Nepal in PM Modi’s speech in the cultural context of the Ramayana is also being seen as significant, given the recent turbulence in Indo-Nepal bilateral ties. It may be recalled that Nepalese Prime Minister K.P. Sharma Oli, widely seen as pro-China and anti-India, had recently triggered a raging controversy by reportedly claiming that the “real” Ayodhya lies in Nepal and not in India and that Lord Rama was born in Thori in southern Nepal.

The Nepalese Government had then immediately swung into  damage-control mode, saying Oli did not intend to hurt the feelings or sentiments of anyone by his remarks. Saying its attention was drawn to various “interpretations” of the remarks, Nepal had said its Prime Minister Oli also did not mean to “debase” the significance of Ayodhya or its cultural value.