Saifuddin Soz: I continue to be under house arrest, false claim made by Centre in Supreme Court

J-K government spokesperson in a tweet had claimed that Soz was not under arrest or detention. 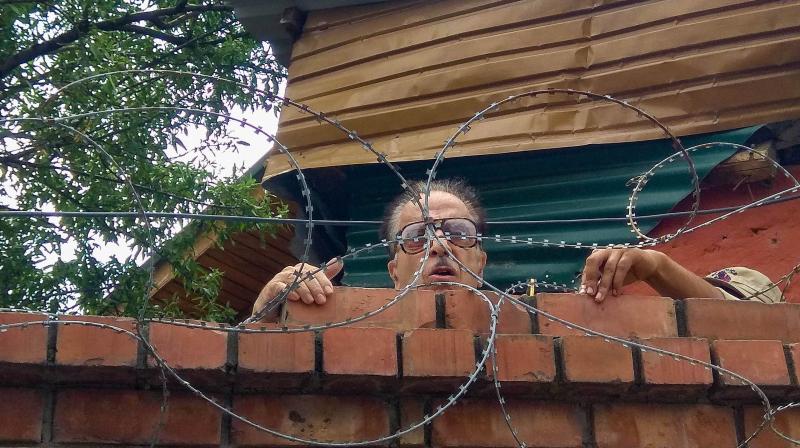 Congress leader and former Union minister Saifuddin Soz climbs up the wall of his house to speak to a media person, in Srinagar, Thursday. (PTI)

SRINAGAR: Congress leader Saifuddin Soz on Monday claimed that he not only continues to remain under house arrest but the police have now locked the entrance gate to his house near the Srinagar Airport from inside as well so that no one could enter the premises either.

He asserted, “Certain observers from outside the State (J-K) have been asking as to why the Supreme Court allowed narration of lies in its courtroom. To that question, I can only say that the country’s judicial system can take notice of all such situations.”

A day after the J-K government had informed the Supreme Court that Soz was not under house detention, the statement which prompted the top court to dispose of a plea by his wife claiming that he had been illegally detained, its spokesman Rohit Kansal reiterated that he was never detained or put under house arrest.

Kansal in a tweet had claimed that “Mr. Saiffudin Soz former MP and Minister not under arrest or detention. He has been to Delhi twice- in October and December. Free to go wherever he likes with usual security drill. No question of lying in Hon SC (sic)”

However earlier during that day (July 30), Soz, who has served as a minister at the Centre and also as J-K PCC chief, was not allowed to speak to reporters who had reached outside his house here.  As he came near the boundary wall of the premises to say that he was “not a free man, but kept under illegal house detention”, a few policemen tried to stop him and then a man in civvies, apparently a police officer, grabbed his one hand and whisked him away. Soz could be heard yelling from behind the boundary wall “Don’t touch me, don’t touch me… This is my house, get out of here.”

The very next day, the J-K police evidently outsmarted the Congress leader by allowing him to come out of his house to visit his ailing sister in a Srinagar neighbourhood and then releasing the video footage of the same to substantiate its claim that he was not under house detention. Soz had termed the police claim “nothing more than a white lie” and claimed that he had later during the day tried to go out again to see his daughter in the neighbourhood but the police did not allow him to move out of his house.