The strength of the security personnel has been increased around vital installations such as the civil secretariat. 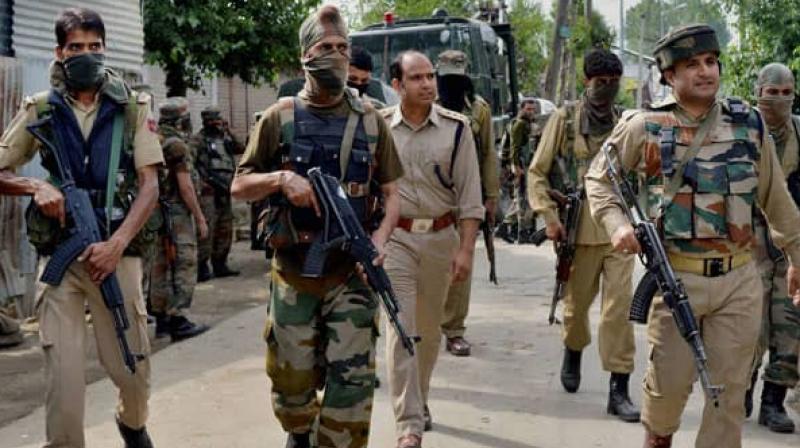 Riot control vehicles have also been kept on standby in some areas where the apprehension of law and order disturbances is more. (Photo: ANI)

Srinagar: Kashmir remained on edge, on Sunday, as authorities stepped up security deployment at vital installations and sensitive areas amid heightened terror threat and flare-up of hostilities with Pakistan along the Line of Control (LoC).

After the Jammu and Kashmir administration curtailed the Amarnath Yatra and asked pilgrims and tourists to leave the valley at the earliest on Friday, anxious residents continue to throng markets to stock on essentials and serpentine queues have been visible outside shops and fuel stations.

Former India all-rounder Irfan Pathan, the mentor of Jammu and Kashmir state teams who was in Srinagar to oversee the trials for the U-16 (Vijay Merchant Trophy) and U-19 (Cooch Behar Trophy) squads, has left Srinagar, along with the young players.

"We have for the time being postponed the second phase of junior team trials...since there has been a government advisory, I had a meeting with Jammu and Kashmir Cricket Association...Accordingly, it was decided that boys need to be sent back home," Pathan told PTI.

Various educational institutions also directed their students to vacate hostels. Additional paramilitary forces, which arrived here last week, have been deployed across the city and in other vulnerable areas of Kashmir Valley, the officials said.

The strength of the security personnel has been increased around vital installations such as the civil secretariat, police headquarters, airport and various central government establishments in the city, they said.

Barricades have been erected on many arterial roads, including the entry and exit points to Srinagar, the summer capital of the state. Riot control vehicles have also been kept on standby in some areas where the apprehension of law and order disturbances is more, the officials added.

In Delhi, Union Home Minister Amit Shah held a meeting with top security officials on Sunday and is believed to have discussed the prevailing situation in Jammu and Kashmir, officials said.

The hour-long meeting was attended by National Security Advisor Ajit Doval, Union Home Secretary Rajiv Gauba and other senior officials. The meeting came amidst fresh skirmishes between security forces of India and Pakistan along the border with the Army foiling an attack by BAT on a forward post along the Line of Control (LoC) in Keran sector, killing five to seven intruders.

The Indian Army has asked its Pakistani counterparts to approach them by raising white flags and take possession of bodies which are lying on the Indian side of the LoC.

The BAT generally comprises special forces personnel of the Pakistani Army and terrorists.

A civilian woman was killed in cross-LoC shelling in Gurez sector of Kashmir last week, while ceasefire violations by Pakistan were reported from several other areas of Kashmir close to the LoC.

Jammu and Kashmir Governor S P Malik has dismissed speculations that the Centre might be planning to do away with Article 35A of the Constitution, which gives exclusive rights to the state's residents in government jobs and land.

Political parties in the state had expressed apprehensions about such action after the Centre deployed additional troops and curtailed the Amarnath Yatra.

The National Conference (NC) held a meeting of its Political Affairs Committee (PAC) where they expressed concern over the "uncertain and uptight" situation in Jammu and Kashmir.

A spokesman said the party would fight any infringement upon the special constitutional position of the state.

PDP president Mehbooba Mufti has called an all-party meeting at her residence on Sunday evening to discuss the situation.

Malik has urged political delegations led by National Conference leader Omar Abdullah and Mehbooba to tell their supporters to maintain calm and not to believe "exaggerated rumours" being circulated in the Valley.