On information from local residents, fire fitting commandos and police rushed to the spot and undertook rescue operations amid pouring rain. 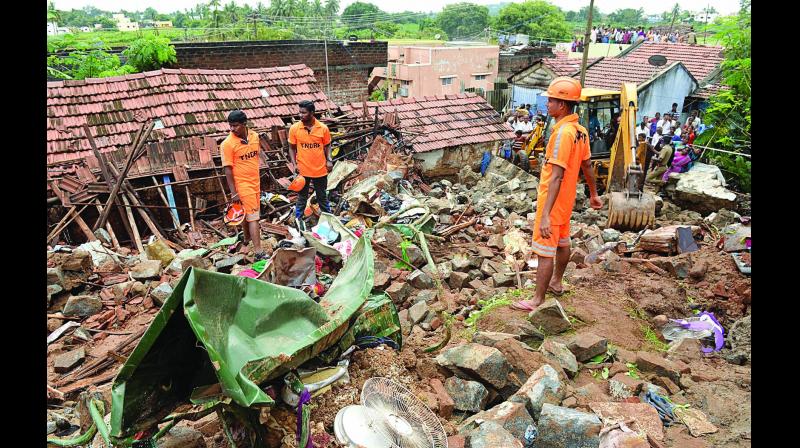 Rescue workers at the site of the wall collapse in Nadur village of Mettupalayam taluk, near Coimbatore, on Monday. Seventeen people were killed in the incident on Sunday night after the compound wall of three tile roofed houses collapsed on them, reportedly due to rains. (Photo: PTI)

Coimbatore: In a heart-wrenching rain-related tragedy, as many as 17 people, including 13 women and children, were killed after a huge compound wall collapsed over three houses at Mettuplayam near here in the early hours of Monday.

Accentuated by heavy rains at the foothills of Nilgiris in Mettupalayam late on Sunday night, a huge 25-ft high, 80-ft wide wall at Nadur AT Colony there suddenly collapsed over three tiled-roof houses around 3.30 am on Monday, hopelessly trapping its occupants.

The police said while NE monsoon lashing Nilgiris and Coimbatore districts, amid frequent, even if moderate rainfall for the past two months, resulting in minor landslide in the hills, many parts of the foothills at Mettupalayam, have been taking the brunt of the heavy rains in the last two days. Today’s tragedy was fallout of acute wetness.

As the landscape was inclined, the compound wall fell over the houses beneath while the residents were sleeping; before they could get up hearing the huge sound, they were buried under the debris of both the collapsing wall and the side walls of their houses that crumbled along with it.

On information from local residents, fire fitting commandos and police rushed to the spot and undertook rescue operations amid pouring rain. The bodies were recovered by 10.30 am on Monday and sent to Mettupalayam GH for post-mortem.

Expressing deep shock and pain at the tragedy, chief minister Edappadi K. Palaniswami announced `4 lakh as compensation to the next of kin of each of the deceased.

Mr Palaniswami will be visiting Mettupalayam on Tuesday. DMK leader M.K. Stalin will also be visiting the tragedy-struck town.

Meanwhile, a group of the deceased persons’ relatives blocked the Ooty-Mettupalayam road on Monday, demanding `25 lakh as compensation for each affected family and legal action against the building owner who built the wall.

The police had a tough time pacifying the protesters till late this evening, when this report was filed. A pall of gloom has descended on Mettupalayam, even as further investigations are on.

In Chennai, governor Banwarilal Purohit in a condolence message said, “I am shocked and grieved to hear about three houses collapsed in Nedur village in Mettupayalam taluk resulting in 17 deaths after a compound collapse due to heavy rain in the state. I convey my deep condolences to the bereaved members of the families.”