The broad outlines of the story are true and based on the Battle of Sinhagad that took place on the night of February 4, 1670. 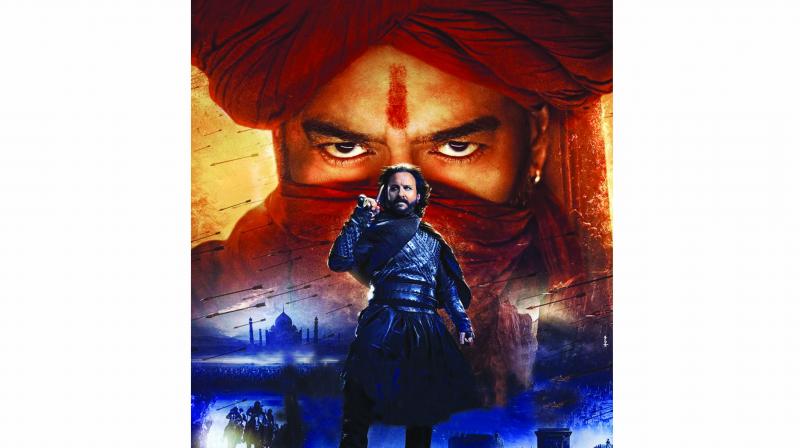 It is to the film’s credit that it manages to turn even this act of saving a widow from burning herself over her husband’s pyre into some sort of evil design.
Rating:

Spawned by the rightward tilt of our times, as well as the regular meetings the Prime Minister has been having with Bollywood worthies, Tanhaji: The Unsung Warrior sets out to sing paeans to a subedar warrior in Shivaji’s army, and give him his due place in Bollywood’s new pantheon of sanskari, Hindu desh bhakts who fought the Mughals.

The express purpose is to toady to the guidelines wherein heroes are created only when they fight for their Mother Land against a specific kind of enemy — meat-eating, lady-leering, Hindu-hating Muslim.

The hero, of course, has to be a family-loving pious Hindu who, when called upon, will thump his chest and sacrifice his all for desh ki izzat.

Director Om Raut and writer Prakash Kapadia, who obviously have these guidelines framed and hanging in their offices, have mounted an impressive war film where two groups of men in long, pleated frocks — one, led by Tanhaji Malusare (Ajay Devgn), under the guidance of Shivaji, and the other, under the command of Aurangzeb (Luke Kenny), is led by Udaybhan Rathod (Saif Ali Khan) — are at war with each other.

The film opens in the mid-1600s, when India was a sweetly chirping sone ki chidiya, and envious, dishonourable foreigners arrived to take over its land and forts.

Delhi was already taken, but that was not enough for the greedy foreigners. They were eyeing the Deccan, where a very young Tanhaji was being taught by his father to make swords and fight with them.

Daddy gets killed in battle with Aurangzeb’s men and Tanhaji grows up to be a formidable warrior upon whom Shivaji, who has had to surrender his forts to the Mughals, relies.

So when Aurangzeb sends his loyal guard-turned favourite soldier Udaybhan to take charge of the Kondhana Fort with the scary Nargis cannon, Shivaji plans to attack and free the fort.

He doesn’t ask Tanhaji, because Tanhaji is busy planning a child marriage at home.

But, of course, Tanhaji gets to know and he dupes Shivaji into giving him permission to wage the good fight. His sweet wife Savitri (Kajol) approves.

The broad outlines of the story are true and based on the Battle of Sinhagad that took place on the night of February 4, 1670.

But Mr Raut and Mr Kapadia have, of course, felt free to twist and add whatever they felt like to serve the larger picture — stitch together a mythical Hindustan that was Hindu, happy, humane with no social evils like caste, sati, child marriage...

So while they leave out Yashwanti, the trained monitor lizard who scaled the wall, carrying a rope the Marathas had attached to her, and helped win the battle, they have added Nagin, a deadly cannon, as a sort of nod towards the Guns of Navarone, perhaps, or Aurangzeb’s favourite cannons — Fateh Rahber (guide to victory) or Azhdaha-Paikar (Python Body) — that were used in the Siege of Golconda in January 1687.

Along with Nagin the cannon, Udaybhan’s entourage also has a special someone called Kamla (Neha Sharma), a widow he “kidnapped” up from atop her Sati pyre.

It is to the film’s credit that it manages to turn even this act of saving a widow from burning herself over her husband’s pyre into some sort of evil design. That he loves her and wants to marry her is of no significance. Because Udaybhan, a Hindu in the service of Aurangzeb, has become non-Hindu by association. He is also ruthless and eats tandoori crocodile.

But Udaybhan is also smart and he fools Tanhaji into killing some innocent Marathas. Soon Tanhaji smartens up and lays siege to the fort.

Tanhaji: The Unsung, whose plot is essentially a march towards the battle, is not a bad film. It is, in fact, quite entertaining when it is at war.

The film’s action sequences, made sharp, urgent and cool by excellent editing by Dharmendra Sharma, are lyrical and seductive, including the human chess scene. The film also puts 3D to very good use. An arrow and a spear grazed my ear, and several men somersaulted and died in the row in front of my seat.

Saif Ali Khan adds a special zing and thrill to the lead up to the climatic battle with his dashing evil swag. He is in top form here, and embraces the stereotypical villain wholeheartedly. He is so good that I found myself rooting for him. It helped, of course, that Ajay Devgn was mostly dull and boring.

Tanhaji: The Unsung would have been a worthy film if it didn’t have a twisted agenda that is laid bare when, in a scene where he is goading a group of men to stop being gaddar, Tanhaji says that under the Mughals “Brahmin puja nahin kar sakte”, Hindus can’t chant “Jai Shri Ram” and yet, in the very next scene, in Udaybhan’s durbar, he sings and dances to Shankara Re Shankara... wearing many shades of saffron.