The film’s success has brought a glow to the iconic actress’ face. 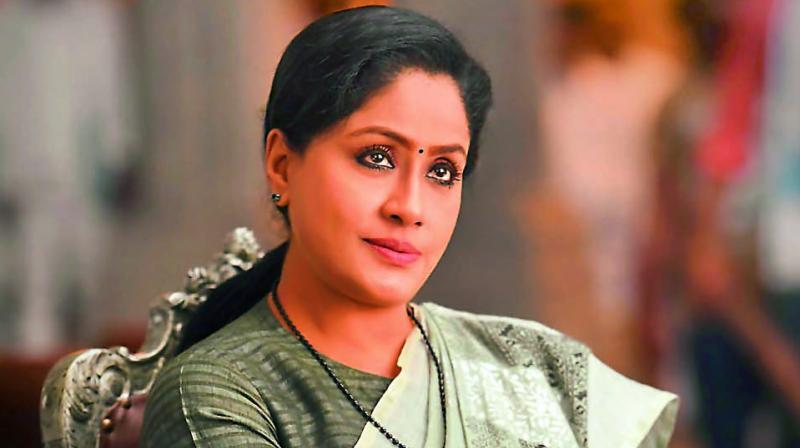 Vijayashanti is delighted and surprised with the great response to her return. “I am back after 13 years  of absence from the screen. Happy to know the audience hasn’t forgotten me and my roles. Even now they call me by the names of the popular characters I played. The response is overwhelming.”

After delivering many hits in the 1980s and 90s in Tamil, Telugu and Hindi cinema, in author-backed female-oriented roles, why was she missing from the screen since 2006?

“Politics sir... politics,” she laughs. “I decided to plunge into the creation of Telangana. And I didn’t to do it half-heartedly — didn’t want people to point a finger at me and say, ‘Look, another actor is using politics to get noticed.’ It didn’t even occur to me that I could use my strong image in cinema to propagate my political ideas. To me, cinema was cinema and politics was politics.”

When she joined politics she had no intention of ever returning to cinema. “I had been acting for 40 years when politics beckoned. I didn’t want to continue with a film career. It had to be politics wholeheartedly.”

So what made Vijayashanti change her mind?

“Mahesh Babu and director Anil Ravipudi! Anil had offered me a role just a year before Sarileru Neekevvaru. I had turned it down. I had no intention of returning to cinema. Again he came back to me with Sarileru Neekevvaru. This time  I couldn’t say no to him. When I heard the role and got to know I’d be sharing screen space with Mahesh Babu, it seemed just right to take on the role. Do you know I started my career as a heroine with Mahesh Babu’s father (Krishna) in the Telugu film Kilaadi Krishnudu in 1980. I also acted with Mahesh Babu when he was a child. And now I’m sharing the screen with him. Amazing!”

Vijayashanti is astounded by the reaction to her role in Sarileru Neekevvaru. “The response is unbelievable. They all want me to  do more roles. And I’m open to it, provided it’s worth my while. At the moment I haven’t  accepted any other role.

I don’t need to do a film unless I’m convinced it’s worth my while.”

She recalls her brief association with  Hindi cinema with fondness. “The first Hindi film I did was Eeshwar with Anil Kapoorji. It was a lovely film. And I had a lovely role in it. I did some more  Hindi films, including Tejaswani where I played a cop and did my own stunts. I also did a film with the great Amitabh Bachchan called Zamanat which, for reasons unknown to me, never got released. That remains a regret. Amitji is such a great star. Do you know, they used to call me ‘Lady Amitabh’ in Telugu cinema because of the author-backed strong characters I played.”

Vijayashanti has always been associated with films and roles that empower the heroine. Sarileru Neekevvaru is no exception. “I’m lucky to get such a part so late in my career. It’s very rare for a leading lady to return after so long with such a powerful character. Now that the Telangana state dream has been realised  I hope to do selected roles from now on. Even one film a year is enough. But the role has to justify my presence.”

She is full of praise for Mahesh Babu and his wife Namrata. “They looked after me like their own family. Until this week we were together, shooting, promoting the film. Now that it’s over I will miss them.”