Vidya Balan loves taking risks, gravitates towards unconventional roles, and has decided to never work with her husband. 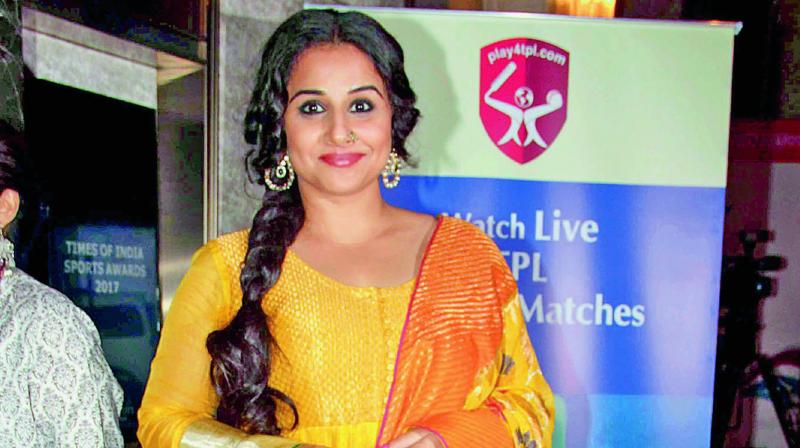 The sassiest thing about actress Vidya Balan is that she takes risks — be it in her sartorial choices or her choices in movies and characters. Yes, sometimes these risks have paid off, and sometimes they haven’t, but it’s rare for a major A-list movie star to go places that might scare other actresses as often as she does. And it’s been that way from the start. Vidya says that she gravitates towards parts that challenge her, and that makes her a compelling presence on screen. With a laughter that’s contiguous, and a friendly warmth, Vidya gets candid about women in Bollywood, the decision to not work with her husband among several things.

Hubby tales
Recently, her husband Siddharth Roy Kapur, post undertaking his new journey of spearheading his home banner Roy Kapur Films, said that he would neither cast his National Award-winning wife Vidya Balan nor his brothers Aditya and Kunaal in any of the projects. Siddharth was quoted saying: “Actually, as a family, we have all decided to keep the professional and the personal separate, and that works very well for us as we can be objective about each other.”

Asked about this, Vidya laughs, “I agree with him completely. We mutually decided not to work with one another. I think it’s healthier that way. Maybe even an essential ingredient to a healthy marriage or relationship. Otherwise we won’t know which is home and which is a movie set. We will be bringing work home all the time. It’s bad enough when one person is going through a tough or stressful time due to work, and if both of us were to go through the same stuff at the same time, it will become maddening.”

Women in cinema
From Kangana’s upcoming Simran where she’s playing a kleptomaniac to Sridevi’s comeback as a vengeful mother, to offbeat cinema within the mainstream genre like Lipstick Under My Burkha, women are being offered roles with greyer shades. “Rather than calling it grey or dark or black, I feel that finally women are getting roles that are more human, real. We are now beginning to humanise our women. It’s no longer only about being everything good. Delving into the grey is really fascinating. Humans are so multi-dimensional with a range of emotions, personalities, layers, and now to finally see it on screen is quite cool. I am enjoying this phase.”

Anger to Joy
Her last venture, Begum Jaan was all about her desire to express anger. ‘I have a lot of anger,’ she said to Mahesh Bhatt who was quick to offer her the role of an unabashed and fearless madam caught in the middle of Partition. Ask her if she’s done with anger and what does she want to explore now, and she smiles, “I am in the happiest phase of life right now. So I want to explore laughter, joy and comedy.”

Her upcoming movie Tumhari Sulu, where she’s essaying the role of a radio jockey named Sulochana, fondly known as Sulu, has helped her explore all that and more.

Asked if as a commercial movie actress she relies mainly on her instincts to choose a movie or gets drawn by a certain brand of cinema, she elucidates, “Instincts. It has to grab me at some level. It (the character) has to make me want to tell that story to the world. I want to feel that character, experience the emotions they are going through.”

And after the release, what counts more — commercial success or critical acclaim? “Commercial success, for sure. That makes me feel that people are liking the movie. That drives me,” she says.

Love for Hindi
The actress who speaks Bengali, Tamil and Malayalam besides Hindi and English, says that she loved learning languages as a school student. “I fell in love with Hindi when I was in school. All thanks to my Hindi teacher, Usha Tandon. She was a lovely teacher and was instrumental in introducing Hindi to me.”

The actress who is associated with Nihar Naturals Shanti Amla has been working towards the cause of children’s education for years now. The brand just launched an initiative called Pathshala Funwala — an innovative mobile phone-based learning system which enables English learning in younger children in an engaging and fun-filled manner on the phone through a toll-free number anytime and anywhere.

Recalling her school days, the actress before concluding says, “I was a fairly good student. I won’t say that I was a rank holder but I was an above average student. I worked really hard in school. Also, just like a normal kid, I didn’t enjoy going to school in the beginning but once I landed there, I had a great time. And now, since I am out of school, like every individual would agree, I miss it dearly. If you’d asked me whether I wished to change anything about those days, I’d say no. I believe everything that happens in life is part of a bigger plan set for you by the Supreme Being.”