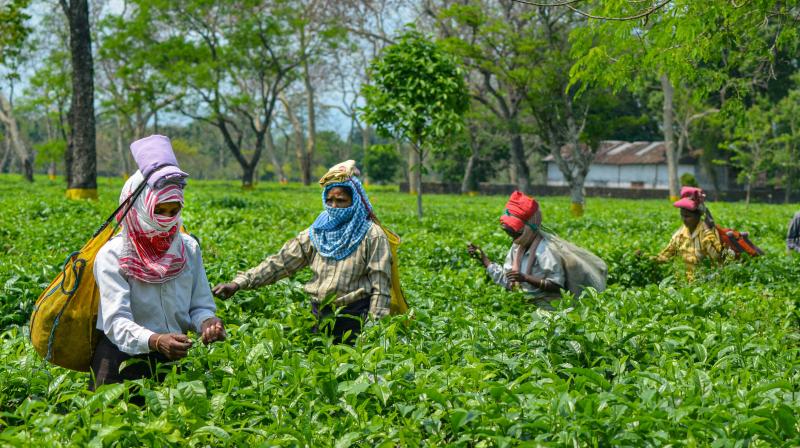 Women belonging to the tea-tribe community work at a garden during the nationwide lockdown to curb the spread of coronavirus, in Dibrugarh (PTI)

Kolkata: The tea industry in two states, West Bengal and Assam, is staring at a loss of around Rs 2,100 crore due to Covid-19 pandemic as production has dipped by a whopping 65 per cent in the past two months.

"Based on feedback received from ITA member gardens, it is estimated that in Assam and West Bengal, the total loss in production for the months of March, April and May would be around 140 million kg.

This would entail a loss in revenue of more than Rs 2100 crore based on last year’s North India auction prices," the Indian Tea Association (ITA) said on Monday.

The ITA stated, "The outbreak of Covid-19 has further aggravated the financial stress of the tea industry. While input costs in the last five years have increased a CAGR of 7-10%, the growth in prices has been only 1% resulting in a large number of tea estates incurring losses.

Teas continue to sell well below the cost of production leading to severe distress among the producing community. The lockdown at the onset of the new season has dealt a big blow to the industry’s viability.

In North India, production in Assam and West Bengal has been estimated to have declined by 65% for the period of March-April and it is estimated that production would further decline by 50% during May."

It added, "Tea estates in Assam and West Bengal after closure of production for three weeks during lockdown, resumed operations from 12th April, 2020 with a partial work force. However, plucking operations could not be resumed immediately as tea bushes which had overgrown due to stoppage of operations during lockdown had to be skiffed/pruned to make them suitable for plucking.

Scarcity of rainfall and a dry spell resulted in the skiffing operations being done with low soil moisture making recovery of unpruned tea bushes slower. The deployment of workforce below the normal strength for a considerable period of time as mandated by the Government has resulted in operational problems thereby posing a grave challenge for the industry."

With cost of production increasing rapidly, the huge loss in revenue has aggravated the financial stress of the tea sector disabling its ability to fulfil its financial and statutory commitments, according to the ITA.

"The industry has urged the Commerce Ministry as well as the State Governments of Assam and West Bengal for extending a financial package to the tea sector in terms of Interest subvention, Enhancement of working capital limit, Relief in payment of Electricity charges and payment Provident Fund dues etc. The various relief packages announced by the Government has so far yielded little for the tea industry. The industry however remains hopeful of positive response from the Government with regard to its submissions."

Due to the closure of production from December, 2019 mandated by Tea Board, the carry over stock this season has been much less.

This combined with the loss of production during the lock down is expected to correct the demand-supply imbalance to some extent. The disruption in the supply chain has led to certain buoyancy in North India CTC Tea prices.

However, the present spike in tea prices will not compensate the huge revenue loss suffered by tea producers caused due to loss of production. Amidst the gloom, the industry remains optimistic on the Export front.

Presently there is strong export demand for second flush Assam tea and Exporters are receiving queries from India’s key markets like Iran, Russia, UAE and Europe. Logistics, however is an area of concern as operations would take some time to stabilise. The demand for tea remains robust.

As per Tea Research Institutions, the medicinal and nutritional properties of tea acts as an immunity booster and promotes healthy life. We are optimistic that demand will continue to rise given the healthy and affordability attributes of this wonderful beverage.