Solar installations drop 35 per cent in first half

However, between July 2019 and September 2019, India added more than 2.2 GW of solar energy capacity. 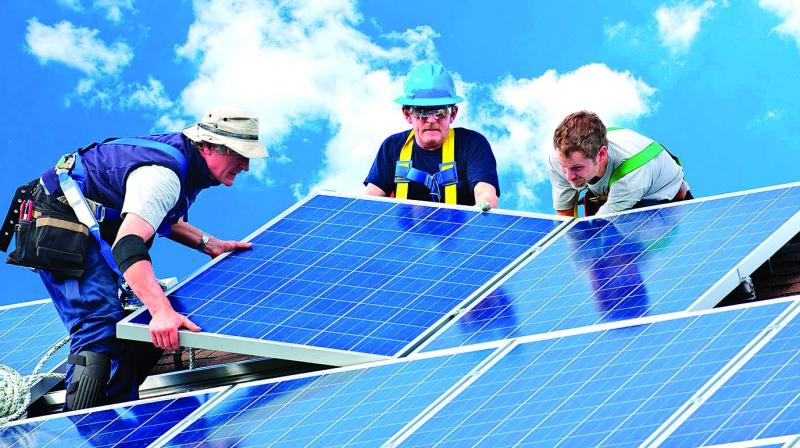 Kolkata: Solar installations in India dropped 35 per cent (year-on-year) in the first half (H1) of 2019. The significant drop notwithstanding, India remains the third largest solar market in the world behind China and the US.   In H1 2019, India installed 3.2 GW of solar power across the country.

However, between July 2019 and September 2019, India added more than 2.2 GW of solar energy capacity. Cumulative solar installations at the end of September 2019 reached 33.8 GW, representing 9.2 per cent of India’s total power generation capacity.

Another significant trend is that despite many policy measures by the Centre to support the domestic solar manufacturing industry, many micro, small, and medium enterprises (MSMEs) in the solar segment feel that these policies have created rather more hurdles than simplifying issues. These are companies that operate as manufacturers of solar modules, ancillary products, system integrators, and raw material suppliers in the solar photovoltaic (PV) space, according to a recent study by Mercom Capital Group Plc.

It pointed out that whether it is the solar pumps or rooftop solar projects that mandate domestic content requirements, the recent policies only favoured the bigger manufacturers.

For instance, EESL announ-ced a tender for 175,000 solar pumps, but only manufacturers of pumps and modules could participate, giving no opportunity for SMEs or MSMEs. To participate in one cluster out of the 13-14, the bid required bonds amount to Rs 3.25 crore ($460,000), the minimum eligibility is Rs 50 crore ($7 million) in turnover over the last three financial years. The bank guarantees are huge, the working capital requirement is high, and there is also a unique clause that the bills will be entered for processing the payment only after 1,000 solar pumps are installed.