Even after assurance from the Centre on the supply issue, many cities have been witnessing sky-rocking prices of the bulb in several mandis. 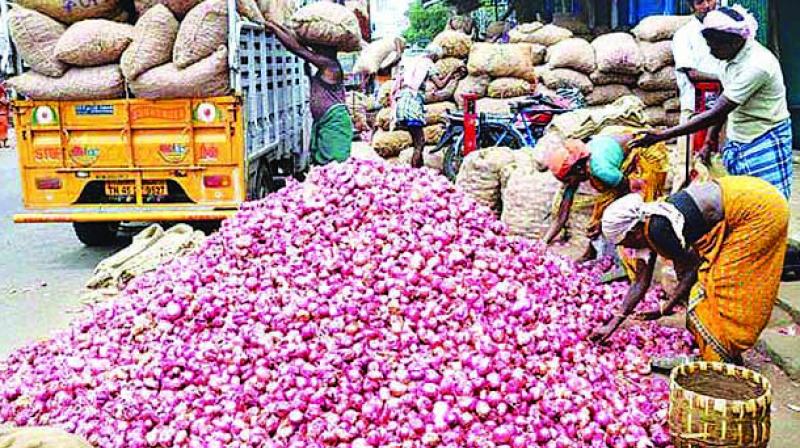 New Delhi: Consumers have a reason to worry as onion prices have refused to budge from its upward movement that started over a month back. The main reason for the spurt in prices is a sharp fall in supply from the low kharif onion output following unprecedented heavy rains in most parts of the country.

Even after assurance from the Centre on the supply issue, many cities have been witnessing sky-rocking prices of the bulb in several mandis.

Onion prices have gone up to Rs 70-100, up by 40-50 per cent per kg in several mandis. As per data available with the Consumer Affairs Ministry on Tuesday evening, the retail price of the kitchen staple in Delhi shot up to Rs 80 per kg, while the same stood at Rs 70 and Rs 50 per kg in Chennai and Kolkata, respectively.

Keeping the consumer concerns in mind, the government blinked on this issue on Wednesday and decided to relax norms, related to supply demand and facilitate import of the key kitchen staple from Afghanistan, Egypt, Turkey and Iran to boost domestic stock. Following which, the Agriculture Ministry relaxed fumigation norms for imported onions up to November 30 in a bid to improve domestic supply and checkthe  soaring prices.

Conceding the fact, even Food and Consumer Affairs Minister Ram Vilas Paswan told the media that he himself reviewed the situation of demand, supply and prices with top officials of Food and Consumer Affairs Departments for two hours at his residence. “The secretaries of both the departments were present. We have reviewed the onion availability and price situation. Prices have gone up as production (kharif onion) has declined by 30-40 per cent in the country,” Paswan said.

Assessing the stock, the minister said, “Much of the onions from the buffer stock of 57,000 tonnes have been disposed of, while 25 per cent of it has been rotten due to short shelf life of the commodity. Still, 1,525 tonnes is left in the central buffer stock.”