Talent she has, in spades. She also has empathy and compassion. That’s what makes Shruti Haasan special 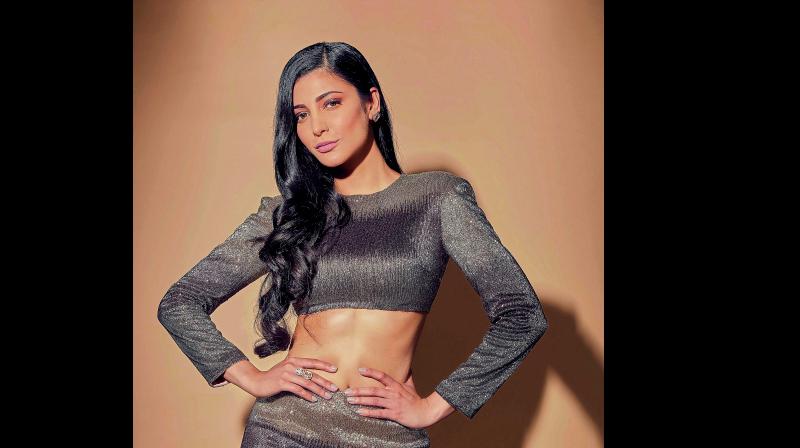 The actress, who is in self-isolation at her Mumbai apartment, is indulging in extensive introspection, her mind is engaged with social issues.

Finding ways to pass time during this lockdown isn’t what’s uppermost in her mind. “This is the time to think about various aspects of life, to try and find answers to some of the unanswered questions. This is the time to learn how to hang out with yourself,” — is Shruti Haasan’s take on coping with the COVID-19 lockdown.

The actress, who is in self-isolation at her Mumbai apartment, is indulging in extensive introspection, her mind is engaged with social issues. “I am trying to stay positive. But the biggest question that arises is — what are people going to do for a livelihood in the current situation and post-lockdown?” she wonders.

Since her return from abroad, she has been in discussions with life coaches on Neuro-linguistic programming, which is useful in overcoming anxiety and depression during such difficult times.

With over 13 million followers on Instagram, Shruti’s ideas on tackling psychological issues have been helping a lot of people. She says heartbreak and anxiety are part of life, especially during such times, and irrespective of gender, it happens to everyone. “The one positive thing is, it gives you an opportunity to think about the reasons why things went wrong and how to get back to normal,” she says.

The actor recently shared a monochrome photograph from her last photoshoot on Instagram, and urged her followers to introspect.

Singing for her father

Shruti has also been reaching out to the people who have inspired her in her career. She was part of her father, actor Kamal Haasan’s song on Coronavirus awareness, titled Arivum Anbum. “I think it is very positive and productive of him to carry out such a wonderful initiative.

He has put the genuine concerns of everyone into words and I was very honoured to be part of this project,” she says.

After starring in the 2017 movie Behen Hogi Teri, Shruti took a break from the big screen and has been working on the American drama series Treadstone. When asked how she has been able to balance her south Indian roots and global exposure, she said, “When you look at the global scene, I am nobody. I don’t want to lean on my film connections or my social media following here; rather I want to climb in an authentic way, doing smaller roles, and finally get to a place where I can say I am part of a global project instead of being known as ‘a Bollywood person associated with foreign projects’.”

Waiting to get back to work

Shruti, who is awaiting the release of two big movies — Krack and Laabam, opposite Ravi Teja and Vijay Sethupathi respectively — opens up on how she misses her busy work schedule.

“Since the lockdown started, everything has been closed down. I really miss the ambience of a film set, traveling to locations, etc.,” she says.

World cinema, like any other industry, has been affected really badly by the pandemic. Recent reports suggest that some segments, especially Australian cinema, will resume work by July. Asked if Indian cinema would follow suit, she says, “It is not right to compare the situations down under and in our country. The population is very low there, when compared to ours. So, there are many factors that we need to consider.

A woman of many talents

Shruthi has been making use of her singing talent simultaneously with her acting skills. Last year, when her father completed 60 years in Indian cinema, she made headlines by rendering her favourite song from his super-hit movie, Nayakan, directed by Mani Ratnam

The Ramayya Vasthavayya actress  started her singing career at a very young age, with a song in Kamal Haasan’s Thevar Magan, composed by the iconic Ilayaraja.  Her latest musical rendition is the part she sang in Kamal’s Arivum Anbum released during the lockdown.

Shruti wrote, narrated and acted in Be the Bitch, a video on women's empowerment.

Her interest in interior design is well-known. The ‘statement piano’ in her apartment stands testimony to her skills in this department.